At the age of 66, competitive canoe racer Laurens (Larry) Castillo counts a total of 16 surgeries since he started white water canoeing more than two decades ago. First his knees, then his shoulders, and finally his back required orthopaedic surgery.

This fall, a year after hip replacement at Resurgens Orthopaedics, the Kennesaw resident won first place in the 29-mile Suwannee River canoe race in Florida and fourth place in the amateur class in the highly competitive 90-mile Adirondack Classic in New York State. In both races, he competed with men of all ages.

Without the surgeries, he would be on shore, watching others race across the water. Now, he jokes, "I can still leap tall buildings, I just have to have a running start."

Castillo competed in white water canoeing on the national level for 15 years and on the international level for three years. Now he competes in flat-water canoe racing and is race director in charge of the Back to the Chattahoochee Race and Festival.

Castillo became a patient of Resurgens Orthopaedics after he moved to Atlanta in 1984. Dr. John Garrett, the practice founder, was his doctor.

"He took care of my knees until he retired," Castillo recalled, as he outlined his list of surgeries.

Initially, the retired IBM employee had both knees replaced. Later, he had rotator cuff surgery on both shoulders, then shoulder replacement surgery, two hip replacements, and surgery to repair damaged discs in his spine.

"Believe it or not, it doesn't bother me," he said. Before the back surgery, back pain limited him to canoeing only about eight miles. Now, that distance "is just a warm-up."

"These days, I work out by walking up and down Kennesaw Mountain and by canoeing on Lake Allatoona. A regular outing on the water is about 40 miles, and most events are at least 50 miles and some are 90 miles." Plus, Castillo said, the competition involves carrying his canoe for up to six miles over mountains.

These days, the only things that slow him down are airport metal detectors. "I no longer fly. I drive," he said.

Castillo has been canoeing on the racing circuit since 1983. Prior to that he was a recreational canoeist. Now he is a safety volunteer for the National Park Service and works on their educational trips on the Chattahoochee. Each group studies on the river for five weekends, and takes 10 miles of the river each time. "We will have as many as 20 boats, and I go along as safety boater."

Castillo is also active with the Upper Chattahoochee River Keepers organization and takes care of their canoes.

“I can still leap tall buildings, I just have to have a running start.” 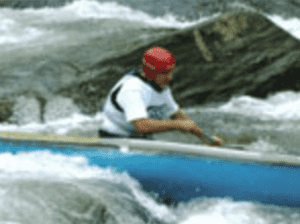