Dr. Paul Jeffords and his patient, Phipps Plaza Santa Claus Johnny Hammond, were recently featured on Fox 5 News in a story about the severe back pain that almost put Santa on the sidelines for the holiday season and the surgery that got him back in the game of spreading holiday cheer. The story aired Tuesday, November 24.

Health reporter Beth Galvin interviewed Santa about his painful condition, his corrective surgery and rehab, and the special place in Atlanta's holiday season his recovery allowed him to reclaim.

"When you have a child coming up here, they come running with those outstretched arms. That's the whole thing; that's Christmas," said Hammond.

Santa was almost prevented from fulfilling his beloved longtime role by his debilitating back pain, which made it impossible for him to sit for long periods of time or pick up children. He was suffering from a condition called spinal stenosis, which is the result of a narrowing of the spinal canal that puts pressure on the nerves.

Dr. Jeffords performed a lumbar lamenectomy to correct the problem.

"I operated on Santa Claus so he was able to get back and do all the things he needs to do for all the little boys and girls."

Santa underwent three months of rehab and is now pain-free. He is back to hearing the Christmas wishes of children from all over Georgia.

“When you have a child coming up here, they come running with those outstretched arms. That's the whole thing; that's Christmas” 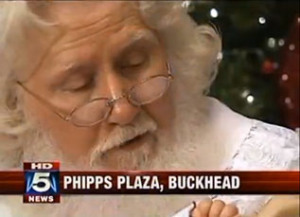